Everybody can find a reason to go to San Diego in the third week of July every year. It started out with comic books; then action figures and memorabilia were added to the mix, and now 50 years in, every aspect of Pop Culture is represented. Anime, cosplay, toys, established and wannabe artist show off their wares, art, talents and latest projects. Television networks, Movie Studios and Gaming companies show off in “experiences” and “activations”.

Then, there are the parties…

I didn’t get to spend time at press events with the Riverdale (my guilty pleasure show) cast, but I did see and meet them at the WB’s Media Mixer party, at the Hard Rock Hotel’s FLOAT Rooftop Bar. Actors from Arrow, Supergirl, Flash, Supernatural, Black Lightning, Legends of Tomorrow and other WB shows were there, including Rahul Kohli from iZombie.

I caught Riverdale vixens Camila Mendes, Lili Reinhart and Madelaine Petsch in a pop-the-balloon carnival game. I won’t tell you who won, but they all got a WB prize. 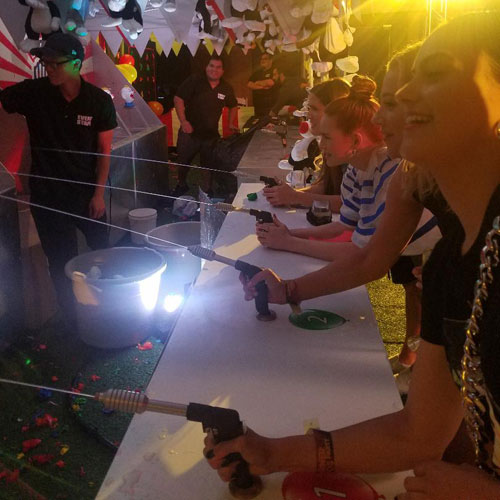 All of the stars were friendly and available for selfies and conversation (sorry, just media types for this event), but Brandon Routh, who first made his mark in the DC Universe in 2006’s Superman Returns, seemed to take more pictures of the mixer than any other celebrity. He’s currently in the CW’s Legends of Tomorrow as The Atom, and is rumored to reprise his role as Superman in the Crisis Crossover. #interesting

Ian Ziering was also there, letting us know that although the Sharknado film series is over, a new menace, Zombie Tidal Wave, was coming our way. I met with the cast and have to say they are very enthusiastic about the project, which includes director Anthony C. Ferrante, who also directed Sharknado.
Zombie Tidal Wave premieres August 17 on SYFY.

FLUXX Nightclub, although officially unaffiliated with SDCC, held three nights of themed parties – Ready Party One, The Nerdists’ Upside Down and The Awesome Mixer vol 2. They even had a red carpet outside. I went to Wednesday night’s party, RP1, and enjoyed the sounds of Back To The Future- themed band, The Flux Capacitors.

While most of the Official Parties were ‘press only’, The Nat Geo (Nerd Night) Party was a mix of music, education and fun, and was open to the public. Newly-rebooted Brain Games was represented, and with a giant shark dancing through the crowd, they showed a bit of the rivalry between Nat Geo’s Sharkfest and Discovery Channel’s Shark Week.

To be clear, San Diego Comic-Con has literally hundreds of events, panels, cosplayers, photo-ops, signature sessions and general shenanigans. Our crew of seven (representing Pop Culture Madness and Age of the Nerd) could only attend and experience a fraction of the goings-on.

The FX Fearless Fandom Activation was a highlight for me, starting with What We Do In The Shadows experience. We spent a few hours having drinks in the vampire house, complete with a bar in their home, filled with things you’d expect in an old gothic lair, sharing drinks with the vampires from the FX Show, based on the film of the same name.

Who doesn’t want to share some time with some vampires who have lived together for hundreds of years? The character actors were in top form, and gave my friend Chicago Pete a new name – ‘Craig the virgin’. Craig will live with his new name forever.

FX also shared a bit of a haunted campground experience with American Horror Story: 1984. Expect the usual hi-jinx, with a little ‘camp’ this AHS season. It premieres September 18.

Amazon Prime promoted The Boys, Carnival Row, and The Expanse. They offered a sneak peak into the first two episodes of The Boys and on Saturday night, Amazon Prime Video turned the whole Experience area into the Carnival Row: Come As You Are Party. It was open to the public, and the event had food and open bar for hundreds of partygoers. Orlando Bloom, Travis Beacham, Tamzin Merchant and Cara Delevingne were there too.

I met with Dark Specter creator/ writer/ director/ star Bruce Nachsin. His character is The Dark Specter, bad guy on the streets, doting mommy’s boy at home. Dark Specter 2 has been the winner of “Best Short Film,” “Best Comedy” and “Best Fantasy” at several film festivals. Dark Specter is a dark comedy, and you can check it out here.
More on Bruce (and the Dark Specter)  later.

The Batman Universe was well-represented. Batwoman will be taking over crime-fighting duties for the missing Bruce Wayne/ Batman in Gotham, and premiering October 6th on the CW.

We won’t be seeing Thomas and Martha Wayne lying in a puddle of blood in Gotham’s Crime Alley this year. We’ll learn about them, and the history of famed future butler Alfred Pennyworth, with an origin story taking place in a timeless ‘1962 London’ but with a 70s soundtrack. Pennyworth debuts on Epix on July 28.

The CW
(Green) Arrow will be saying goodbye with a shortened 10 episode season. Arrow star Stephen Amell expressed real disappointment, and had a touch of anger,  that co-star Emily Bett Rickards would not return for the final season. They’re still friends- he’s going to see her on Broadway, he told me. Arrow does have two episodes after Crisis on Infinite Earths, so who knows what will happen to the character.

The guys from Supernatural were left in a bit of a pickle at the end of last season (#14), when Chuck let loose all of the creatures Sam and Dean had previously defeated. I spoke with the crew, and will update details closer to air dates. The final season (#15) will have 20 episodes to wrap things up. Jack, played by Alexander Calvert, is back in the game.

Supergirl gets a new costume in Season 5.

The Legends of Tomorrow didn’t show for press events, but they will be in the Crisis Crossover. We expect Astra, the young girl Constantine accidentally sent to hell in the original NBC Constantine series, to be this season’s Big Bad. She’s not a little girl anymore, and having grown up in hell,  she’s not happy with John Constantine.

Crisis on Infinite Earths is the big crossover event for the CW this year, based on the 1985/1986 comic book maxi-series. Two Superman, Lynda Carter (as 70s TV Wonder Woman) and Burt Ward (60’s TV Robin), among others, will guest star and you can probably expect an iconic tribute shot based on one of these classic covers: 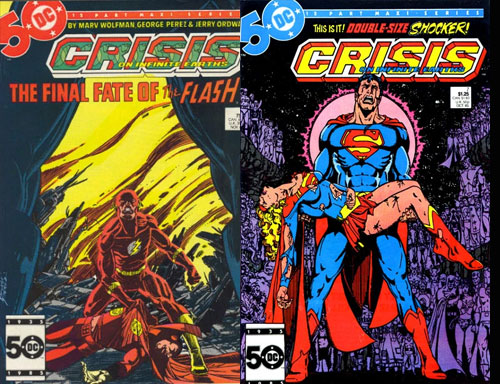 Marvel Cinematic Universe Phase 4 Updates:
Thor: Love and Thunder – Valkyrie will return as the king of New Asgard and Jane Foster (Natalie Portman’s ) will become Lady Thor. Valkyrie actress Tessa Thompson said “As new king, she needs to find her queen,” during the panel, “That will be her first order of business. She has some ideas. Keep you posted.”  Taika Waititi will direct Thor 4, in theaters November 5, 2021. Chris Hemsworth will hopefully return as Thor with his adventure with the The Guardians of the Galaxy in 2022.

Marvel is adding it’s first film with a bit of horror with Doctor Strange in the Multiverse of Madness, with a release date of May 7th, 2022. Scott Derrickson is back as director. Benedict Cumberbatch will return in the title role. Elisabeth Olsen will co-star as Scarlet Witch / Wanda Maximoff.

Asian fighting style will return with new MCU hero Shang-Chi and the Legend of the Ten Rings with Simu Liu, Awkwafina and Tony Leung, directed by Destin Daniel Cretton. In theaters February 12, 2021.

Black Widow, starring Scarlett Johansson, David Harbour, Florence Pugh, O-T Fagbenle, and Rachel Weisz. Directed by Cate Shortland will be in theaters May 1, 2020. Yes, she died in Endgame, so this will probably be set in the past.

The Eternals was announced, with a release date of November 6th, 2020. The primary cast of characters were introduced – Angelina Jolie as Thena, Salma Hayek as Ajak, Dong-seok Ma as Gilgamesh, Lia McHugh as Sprite, Kumail Nanjiani as Kingo, Brian Tyree Henry as Phastos, Lauren Ridloff as Makkari and Richard Madden as Ikaris.

Oscar-winner Mahershala Ali will appear in reboot of Marvel’s Blade (the half vampire). He also played Cornell ‘Cottonmouth’ Stokes in Netflix’s Luke Cage, which stings fans of the Netflix series a bit. Wesley Snipes, who played the character 1998-2004 is OK with it, so we should be too.

No official word on The X-men, Wolverine, Fantastic Four or Deadpool from Fox.

Prior streaming shows (on Netflix) Daredevil, Jessica Jones, Luke Cage, Iron Fist and The Defenders will likely be rebooted (if produced at all) in the far future, with different casts and production teams.

Loki and WandaVision are set to drop on Disney+ in Spring, 2021. Details are scant for both shows.

Hawkeye, with Jeremy Renner, is an original series that will also introduce Kate Bishop, coming Fall, 2021.

The Falcon and The Winter Soldier, is a new series with Anthony Mackie, Sebastian Stan, and Daniel Brühl, coming Fall, 2020.

2 MCU Rumors:
Welsh actor Taron Egerton, best known for his role as Elton John in Rocketman, will be the next Wolverine, according to comic book writer, Mark Millar. The rumor has been picking up some buzz…

The Fantastic Four may be introduced at the end of Marvel’s Phase Four.

I can’t just leave without a piece of interesting trivia…

I spoke with famed film composer Christopher Young, known for his scores for iconic horror films including Hellraiser, Drag Me to Hell, The Grudge, Pet Sematary (2019) and others. More on him (and other production people) later. Chris’s first paid gig was the trailer for 1984’s The Philadelphia Experiment. He told me he never saw the movie. He didn’t miss much.