The first week of July, 1982 had an amazing selection of films if you wanted to go to the movies…

No major movies came out between July 1 and July 8 in 1982, mainly because they didn’t need to; May and June of 1982 had some of the most popular and influential films of all time.

There were also Annie films in 1918, 1932 and 1938. Each of the films and the Broadway show ended on a more positive note than the final comic strip, printed on June 13, 2010. In the comic strip, her father-figure, Daddy Warbucks, thought Annie was dead, while Annie was trapped in the hands of a pirate in Guatemala.
#ambiguousending 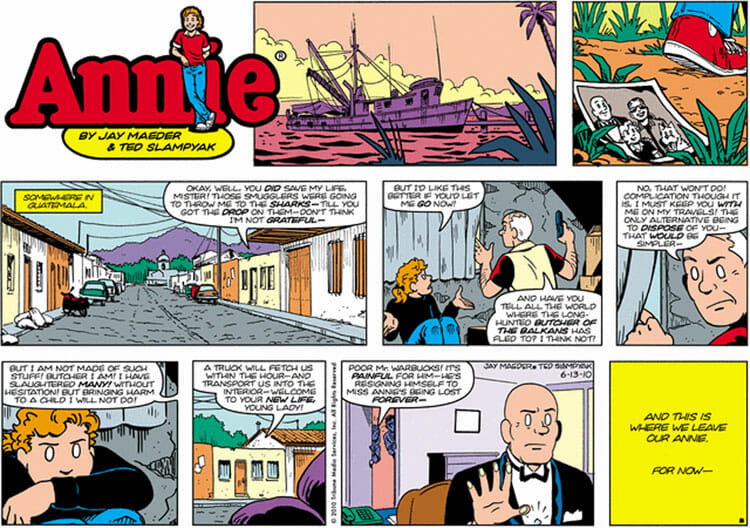 8. Blade Runner (released 6/25) directed by Ridley Scott,, was the first totally cool sci-fi thriller. The style is NEO-NOIR. Every serious modern science fiction film is compared to this. It based on ideas and concepts from Philip K. Dick’s novel Do Androids Dream of Electric Sheep? In 2017, Blade Runner 2049 was released as a sequel.

7. The Thing (released 6/25) Based on 1938 novella “Who Goes There?” I’m still not sure if I want to call it SCI-FI or HORROR. It was an all male cast except for a computer voiced by Adrienne Barbeau. (spoiler ahead) The end features Kurt Russell and Keith David as the last survivors of an alien that possesses and kills people in Antarctica. Either of the them could be the alien. They face each other TO SEE WHAT HAPPENS. Fade to black.
#ambiguousending

6. The Road Warrior: Mad Max (released 5/21) It was the sequel to 1979’s Mad Max, still starring Mel Gibson, and, along with the first film, was one of the first to show a post-apocalyptic Earth in a fairly realistic way. Of course there were more sequels:
Mad Max: Beyond Thunderdome (1985), Mad Max: Fury Road (2015).

5. Conan The Barbarian (released 5/14) Conan first appeared in Weird Tales (December 1932), and lived during the “Hyborian Age” – after Atlantis fell, but before any known civilizations, some 10 to 25 thousand years ago. This movie gave us Arnold Schwarzenegger AND James Earl Jones. The Soundtrack, by Basil Poledouris is literally my favorite soundtrack ever for a mainstream movie.

3. Star Trek II The Wrath of Kahn (released 6/4) Another 1982 sequel, for both the first film series and from a 1967 episode of the TV show called ‘The Space Seed’. They used Kahn again in 2013’s Star Trek Into Darkness. Arguably the best film in the franchise.

2. Rocky 3 (released 5/28) Rocky 3 was right in the middle of the Rocky franchise and some say it was one of the best sequels of all time, I’d call Rocky 3 the Godfather 2 of Rocky Sequels. Rocky IV was the only film the series to earn more at the box office.

1. E.T The Extra-Terrestrial (released 6/11) Stephen Spielberg’s Biggest Movie. And it was probably sold the most licensed character items for lunchboxes, toys and bed sheets throughout the 80s. The film also introduced us the Drew Barrymore. #ETphonehome

Grease II came out a few weeks earlier, on June 11, but was out OUT of theaters by July 2nd for some reason, so it did not make the list.

Later in July, several other movies were released:

July 30
An Officer and a Gentleman
Night Shift
Zapped!

And August 20 gave us The Beastmaster, which will one day get it’s own story here.